ADR Will Make you Resolve your Conflicts Peacefully!

You may be familiar with the saying: In this world nothing can be said to be certain, except death and taxes.

But in our opinion, you can also be certain that when people are forced to interact – whether in a family, at work, or just walking on the same street – disputes will happen.

It is human nature to be defensive of one’s space, property, resources and opportunities. And no matter how far we advance as a society, we will never outgrow the instinct to make decisions based on emotion.

These emotional thought processes often prompt people to try and find justice for their issues in the court system.

But not everyone has equal access to court intervention; fees can be crippling. You can easily spend more than $20,000  before you even step foot in court. Not to mention the amount of time court proceedings can eat away.

People short on money and time need another outlet to resolve disputes.

ADR is known to have high success rates, cost less, and save valuable time.

In general, parties in dispute meet with a professional third party, outside of court, who will walk them through the process. Although it is less formal than court proceedings, decisions may still be legally binding, depending on the type of agreement.

There are many forms of ADR to fit a variety of needs.

While each type of ADR has its own applications, the overall advantages are similar.

In a clogged court system, ADR is a faster way of resolving disputes that is also cost-effective and highly successful.

The Department of Justice found that voluntary ADR helped resolve 75% of disputes in 2016, while court ordered proceedings only resolved 56%. 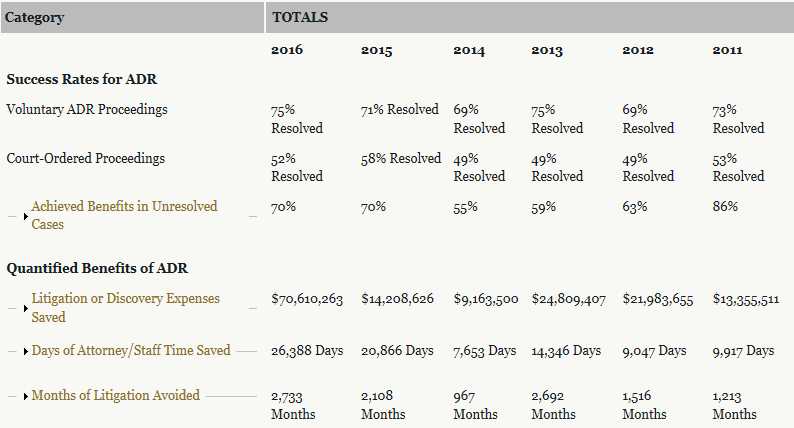 Part of this success can be attributed to the fact that ADR processes are more collaborative in nature and encourage parties to listen, helping them understand the other person’s position.

ADR also allows flexibility in problem solving. Resolutions can be more creative than courts are legally allowed to enforce.

Finally, ADR is a confidential process, so disputants do not have to be concerned about their discussion becoming public record. This makes ADR a good option in situations where sensitive matters like trade secrets or divorce need to be discussed.

ADR is useful for almost any type of dispute, whether individual or corporate. However, the type of dispute will inform the specific type of ADR and tactics used.

Because ADR is so versatile, it should be the first step for any parties in dispute.

In fact, although ADR is usually voluntary, some courts mandate disputants attempt ADR before taking their case to court. This is beneficial for both the overextended court system and the disputants.

Since ADR has such a broad scope of applications, we will focus the remainder of the article on the two most common forms of ADR: mediation and arbitration.

Mediation is a form of ADR where a professional third party – the mediator – helps two or more disputants collaboratively resolve their differences.

The role of the mediator is not to make decisions for the disputants, rather, it is to add structure to the process, ensuring all parties have equal opportunity to explain their position and express their concerns.

What happens in mediation is built around communication.

Mediation is typically a less formal process than arbitration, with discussions usually taking place in a neutral location.

All mediation sessions can be scheduled at the convenience of the disputants, and in some cases, can be resolved in a matter of days.

A session begins with opening remarks from the mediator who will likely confirm the issue, acknowledge that briefs from each side have been submitted, and explain the process that is about to unfold.

Once the mediator has made their opening remarks, each party will be given a chance to recount their side of the story, uninterrupted. This is not an attempt to find the truth, it is a chance for the parties to frame the issue in their own mind and let the other party know their thought process.

As the discussion continues, the mediator will ask open-ended questions to help the flow of information and continuously summarize what has been said to ensure everyone is on the same page. Using this information, the mediator will try to determine common goals between the parties, so an avenue for resolution can be discovered. 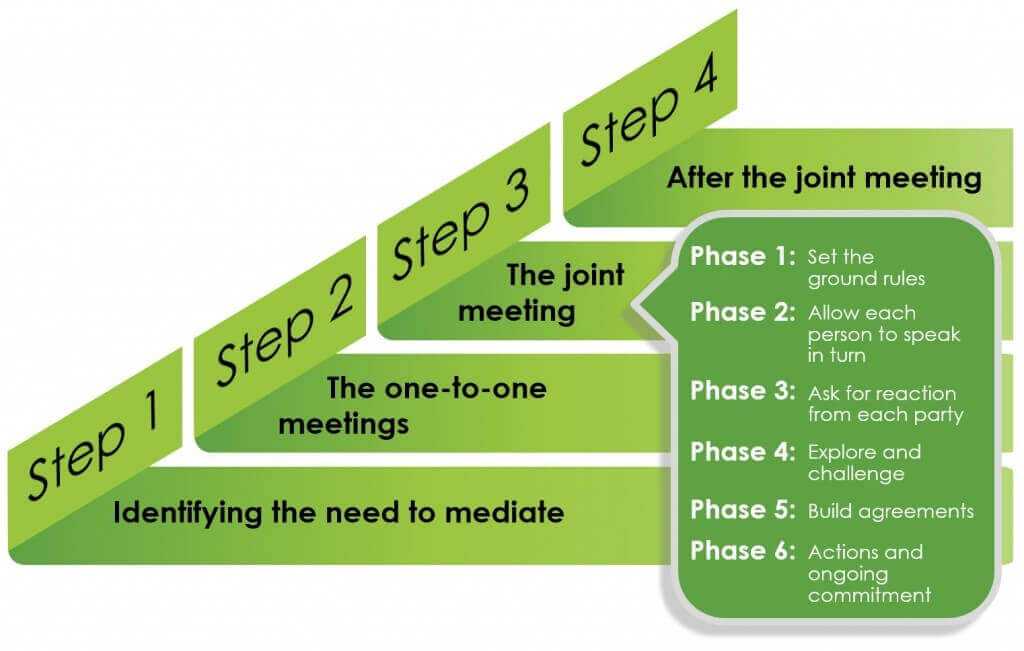 While the above describes the basic structure of mediation, there are several specific styles:

This is the original style of mediation, where mediators simply seek to facilitate negotiation among the disputants. The ultimate goal is to help both sides achieve their goals and reach long lasting agreement.

This style of mediation focuses more on outcome and less on the individual interests of the disputants. This may be the right choice if you are short on time and avoiding court is important to you.

This is a relatively new style of mediation focused on creating a new narrative to reshape the conflict. Mediators in this field often have a mental health background.

This is another new addition, primarily focused on rebuilding the relationship. It may be the right choice if you need to have a continuing relationship with the other party. And like narrative mediation, mediators who use this approach usually have a mental health background.

Mediation has been proven to deliver results. The CEDR recorded a settlement rate of 86% in the UK in 2016, with 67% of those settlements achieved on the day of mediation and the remaining 19% achieved shortly afterwards.

But to see those results in your case it is important to pick the style of mediation that will work best for your situation, and find a mediator who specializes in that style.

Beyond the style, it is also important to look for a mediator who has overseen cases similar to yours. For example, if you are getting a divorce, it is beneficial to find someone who specializes in divorce mediation.

Although litigation still beats all forms of mediation as the first choice in dispute resolution for most people, more countries are beginning to recognize its potential. And they are showing this recognition by making mediation a mandatory part of the process.

Countries like Brazil, Canada, France, Germany, Belgium, the Netherlands, Poland, Portugal, and the United States have instituted mandatory or quasi-mandatory mediation in at least some regions.

In the US, even though the exact regulations vary state to state, most courts now use mediation programmes to help parties settle disputes. Depending on the location, these may be state sanctioned mediators, or 3rd party referrals.

The numerous benefits of mediation – maintaining control, saving money, and saving time, etc. – make it a clear first step on the road to dispute resolution.

Like mediation, arbitration is a method of dispute resolution that involves an impartial third party (the arbitrator), while avoiding litigation.

For this reason, the benefits of arbitration are similar; disputants are able to avoid the expense, delays, and adversarial nature of litigation.

During arbitration, disputants do not have control over the outcome of the process. Instead, they agree to be bound by the decision of the arbitrator.

The process usually starts when one party, the claimant, sends a notice of arbitration to the other party.

Rather than attending multiple sessions, there is one arbitration hearing where evidence and witnesses are presented, after which, the arbitrator or panel of arbitrators will deliver the decision.

The parties in dispute directly select an arbitrator.

An arbitrator from the American Arbitration Association is appointed by the court based on a contract signed by the disputants.

Arbitration has traditionally been a popular method of dispute resolution in labor, construction, and securities regulation, but is steadily gaining traction in other business areas.

The popularity of arbitration can be attributed – in part – to the relatively short amount of time it takes. From the time of filing to decision, arbitration takes an average of 475 days, while similar cases can take up to three years in court.

And although it costs roughly $3000 to $4000 per day – which can be costly, the time saved usually translates to an overall savings.

Because it is gaining traction as a viable alternative to court, some arbitration proceedings are mandatory, while others are independently enforced by contract.

Arbitration is federally supported under Title 9 of the U.S. Code.

Despite federal support, there are numerous state laws impacting ADR. Most states have adopted the Uniform Arbitration Act into law, making arbitration decisions enforceable by law in many places.

Other countries around the world are also recognizing the potential of arbitration.

In Europe, arbitration has become the default for international disputes, and countries like Canada, Brazil, and Australia have shown increases in commercial arbitration, with strong government support.

The worldwide movement to embrace arbitration is a clear indicator that the process works.

Mediation and arbitration are both forms of ADR where a neutral third party is tasked with helping disputants resolve their differences. 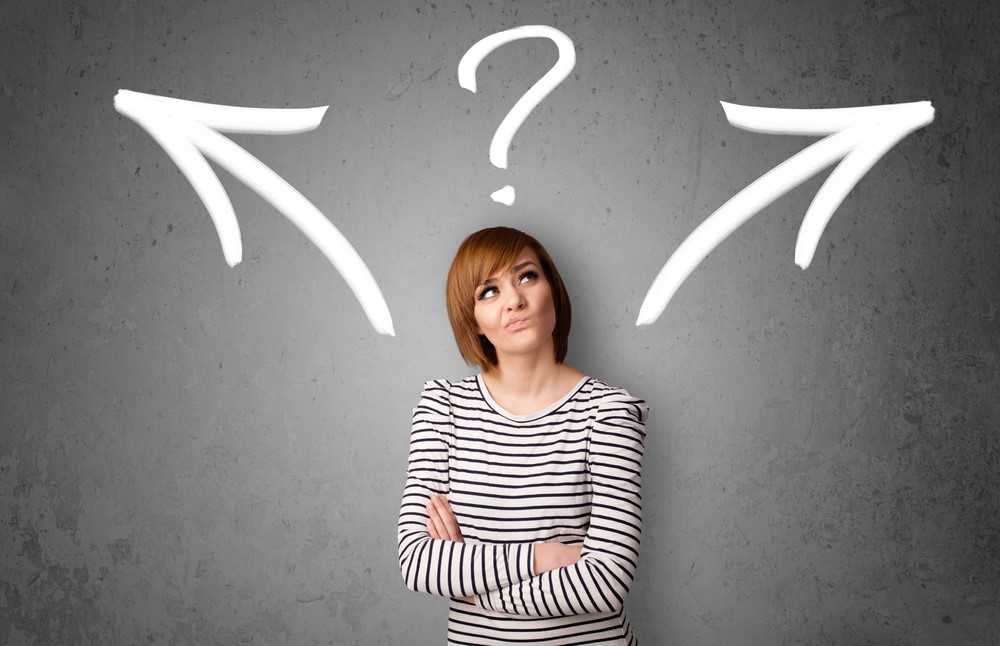 The benefits of each are similar. They are faster, less expensive, and less adversarial than litigation.

Both of these methods also have support from the American government in the form of mandatory participation in certain circumstances and in certain regions.

However, there are vital differences between the two processes.

processes can be binding, but it is more common to apply mediation in a non-binding way, while arbitration is always binding. Arbitration is acts as a simplified, but still legally enforced, replacement for litigation.

Because of this difference, there is also a difference in the power of the arbitrator and the mediator.

Arbitrators have full power to decide the outcome of the settlement, but during mediation, the power to make decisions lies with the disputants – the mediator is only there to guide the process.

The number of people involved is also usually different. Arbitration most often involves a panel of arbitrators who discuss the evidence and make a joint decision. Mediation on the other hand, almost always involves a single mediator who is there to guide the process.

Overall, arbitration is a more formal and controlled process that acts as a kind of ersatz court proceeding, while mediation is more free-form and can look a number of different ways depending on the needs of the disputants and the style of the mediator.

Both options will save time and money over litigation, but the option you choose will depend primarily on your end goal.

Disputes are an inevitable aspect of human life. All societies, at all times of human existence, have been met with dispute, but the one thing that has evolved is the way we deal with it.

The latest iteration of dispute resolution is ADR, which boasts a statistical advantage of success over more adversarial proceedings like litigation.

ADR is the general term for a variety of informal processes that involve intervention by a neutral third party. Mediation is one of the most common forms of ADR, which is unsurprising when you consider it has an 86% success rate.

Mediation is all about facilitating communication and gives the control of the resolution to the disputants.

Arbitration is another common form of ADR, but unlike mediation, disputants submit control of the settlement to the arbitrator or arbitrators who review the facts and testimony and decide on a legally enforceable decision.

Arbitration saves time and money over litigation, but mediation is the most cost-effective solution.

If you’re ready to start looking for a mediator, you can find the perfect fit in the MediatorSelect directory.

Now we want to hear from you!

Tell us about your experiences with ADR down in the comments.