A Comprehensive Guide to Divorce Mediation

OK, let's tackle these questions one by one.

let's start from the basics.

1. Divorce is not the end

When one door closes, another one opens.

If you’re going through a divorce, clichés like this probably make your skin crawl. People around you will no doubt try to lift your spirits with platitudes as you try to grapple with the idea that the life you pictured for yourself is coming to an end.

But as obnoxious as some of those clichés can be, they aren’t exactly wrong. It’s not the end. Divorce, if done right, can be an opportunity to make positive changes in your life. 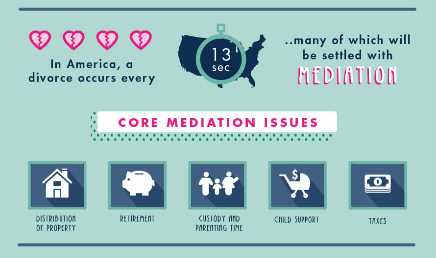 First, remember that you’re not alone. Even though the overall trend for divorce has decreased since the 90’s, divorce remains commonplace. In-fact, the marriage to divorce rate has remained around 2:1 since 2000.

And divorce mediation is a great first step toward that positive change.

2. What is divorce mediation?

In the last few years, there has been a dramatic increase in the number of couples opting for divorce mediation.

This increase in popularity is unsurprising when you consider that nearly 90% of mediated divorce cases have settled successfully. And, more than two-thirds of couples are satisfied with the process. Not bad for something that is usually associated with negative feelings!

We’ll discuss the benefits of mediation that result in this type of satisfaction a little later on. But first, to understand divorce mediation, it is important to understand mediation more generally, and how it may differ from location to location.

Where you live, it may be a mandatory part of the proceedings, or it may be an available option for you to consider. Either way, mediation is meant to help you resolve disputes with another party by accessing the guidance of a neutral 3rd party.

2.1 Mediation in the world:

While many things are densely regulated in Europe, there is more flexibility in the approach to mediation. Only one mandatory stipulation exists in the Mediation Directive: any party must be able to end mediation at any time.

This ensures that no mediation will render outcomes against anyone’s will.

However, it is up to individual countries to decide whether they will institute mandatory mediation. That is, an attempt at resolution through mediation must be made, although parties still have the option to end it at any time.

With the freedom to choose an approach to mediation, it has split European nations into two camps.

On one side, you have countries that are tentative to make mediation mandatory. In countries like France, mediation can only take place on a voluntary basis. Other countries like Belgium, Germany, the Netherlands, Poland, and Portugal do not have general mandatory mediation, but have instituted it for a few select types of proceedings.

In the other camp, you have the majority of English speaking countries. Places like the UK have not made mediation fully mandatory, but they have allowed courts to demand explanations from parties who are unwilling to attempt mediation.

This kind of refusal can entitle courts to place the burden of costs on the unwilling party.

Australia is another country that has long promoted pre-litigation attempts at mediation. They opt for a quasi-mandatory system where most courts are given the power to make mediation compulsory on a case-by-case basis.

A more recent adopter of pro mediation legislation is Brazil. In 2016, Brazil updated their Civil Procedure Code to make mediation or a conciliation hearing available in the early stages of most lawsuits involving individuals, private entities, and public entities. The aim of this change in regulation is to promote the adoption of mediation and increase awareness among citizens who may not know it is an option.

In Canada, there have been small steps taken in favor of mediation. A few provinces such as Ontario and British Columbia mandate mediation under certain circumstances. But, there is no national standard governing the use of mediation across the country, despite evidence that this kind of pre-trial negotiation could have a positive impact.

2.2 Mandatory mediation in the United States

The favored approach to mediation in the United States is similar to English speaking countries in Europe, where mediation gained early adoption.

While most states do not require mediation, there are some instances where it is required within a given jurisdiction. For example, California mandates mediation for all ‘non-exempt unlimited civil cases’ where the amount in controversy does not exceed $50,000 per plaintiff.

In other states, it is not the amount of money, but the type of case that matters. For example, Delaware enforces mandatory mediation for all bankruptcy advisory proceedings.

Sometimes, enforcing mediation is at the complete discretion of the court. In Illinois, courts can choose to order mediation on a case-by-case basis, similar to regulations in Australia.

Although regulations change state to state, most courts in America now use mediation programmes to help parties settle disputes. Depending on the location, these may be state sanctioned, or 3rd party referrals.

At its core, divorce mediation is about you and your soon to be ex-spouse deciding on an agreeable solution that is as cost-effective as possible.

When two lives have become intertwined, there are many things to consider when pulling them apart. You’ll need to think about the distribution of property, child custody, child support, retirement, and taxes to name a few.

Each mediator will bring their own style to the table, but the basic process remains largely the same.

First, a preliminary phone call will take place to provide the mediator (or their assistant) with background information about your marriage and situation. Note that some mediators will ask for more information at this time than others.

Next, an in-person meeting will be scheduled to discuss the situation in greater detail. At this time, the mediator will let you know what to expect from the rest of the process.

For instance, the mediator will explain whether they would like to meet both parties together or separately, and they will also discuss important housekeeping items like confidentiality.

The duration will depend largely on the specifics of your case and how many sessions are required to work through everything.

The average mediation process takes roughly 3-6 months to allow time for collecting all of the necessary information and documents. Mediation is broken down into sessions. You can expect anywhere from 1 to 5 sessions that each last about 1 to 4 hours.

But the time this takes can also vary depending how fast or slow you and the other party would like to move.

If you have children or work obligations, it may be beneficial to try and move as quickly through the process as possible. However, some spouses opt to slow the process down when things like health insurance or even emotional preparedness need to be considered.

If you want to move more quickly through the process, it is important to fill out any requested preparations in advance and provide the necessary documentation.

There are a few costs to consider when getting a divorce.

The mediator will likely charge their time by the hour, so this is another consideration when deciding how slowly or quickly you want to move through the process.

There will also be a filing fee owed to your county, which averages roughly $300.

If you decide to opt for professional legal drafting this is an additional fee you will have to consider. It will be in the realm of $1200 - $1500.

Although divorce will always be a relatively expensive process, divorce mediation is generally 20-50% less than the traditional legal process.

But not only financial costs should be considered. The emotional costs of a stressful conflict often outweigh anything financial.

Just take this cautionary case from one of our contributors. A couple, who started out financially sound, decided that litigation, deceit, and never giving in were the best ways to get what they wanted from their divorce.

Not only did they end up in complete financial ruin, the never-ending stress of the situation prompted a heart attack in the husband, which ultimately led to his death.

The couple spent multiples what they could have spent on mediation, but hubris got the best of them.

3. Why use divorce mediation?

If the story relayed above didn’t convince you, let’s take a deeper dive into the benefits of mediation. 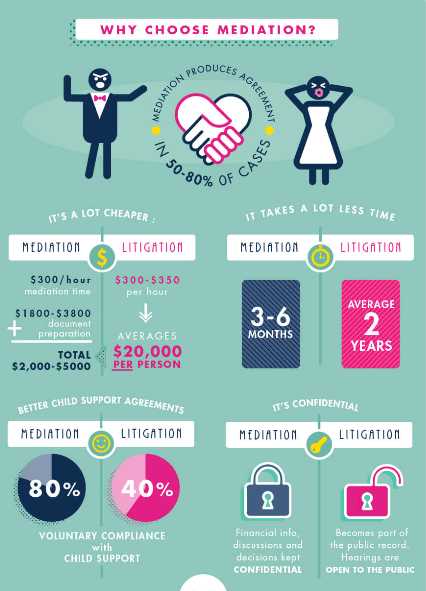 As previously mentioned, it costs about 20-50% less than traditional legal proceedings.

Mediation also gives control to the parties in dispute, rather than relying on attorneys to make the decisions.

Being a collaborative effort, and having control over the speed of the process also means that it can be made much easier for any children involved. 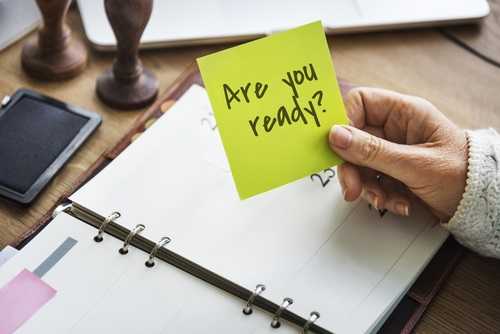 Here is how both parties should prepare:

Like we discussed, mediation is generally a voluntary process in the United States, but taking advantage of it is to your benefit, so it is an option you’ll want to carefully consider.

And know that mediation does not mean that you and your spouse have to feel like best friends during the process. Disagreements are inevitable; that’s why the mediator is there to help guide you through the process.

A mediator can’t help you distribute possessions they don’t know you have. So get organized and create lists of everything you can think of. Don’t leave off items because you think they clearly belong to you or your spouse, make sure to include EVERYTHING.

Make lists of more than physical possessions. Make sure you mention any bank account, income source, recurring expenses, or anything else that should be taken into account.

At this point, it’s time to figure out your best case scenario. Think about what is most important to you, and what you might be able to live without.

This part is likely going to be the most difficult, so create lists of what you want, and try to be as realistic as possible. If you have children to consider, try to keep decisions about them separate from these decisions.

Divorce can be very tough for kids. Everything starts changing around them, and they don’t really get a say in it. Try to keep this in mind as you communicate with them (in an age appropriate way) about what will change.

Keeping kids in the dark about what’s going on can be an added stress. Your kids will need a lot of patience during this time, but they are resilient, and with clear communication and a strong effort to continue co-parenting, they will be ok.

Once you have a clear idea of what you want to accomplish, it’s time to find a divorce mediator.

This will take time, because not everyone who calls themselves a mediator has the same caliber of training or experience. Look for someone who specializes in divorce mediation, and be sure to ask lots of questions.

You’ll want to know things like how many cases they have mediated, where they received training, whether they completed an apprenticeship, and how many hours of training they completed before becoming a mediator.

You can also search online to see if they have built an effective mediator profil. 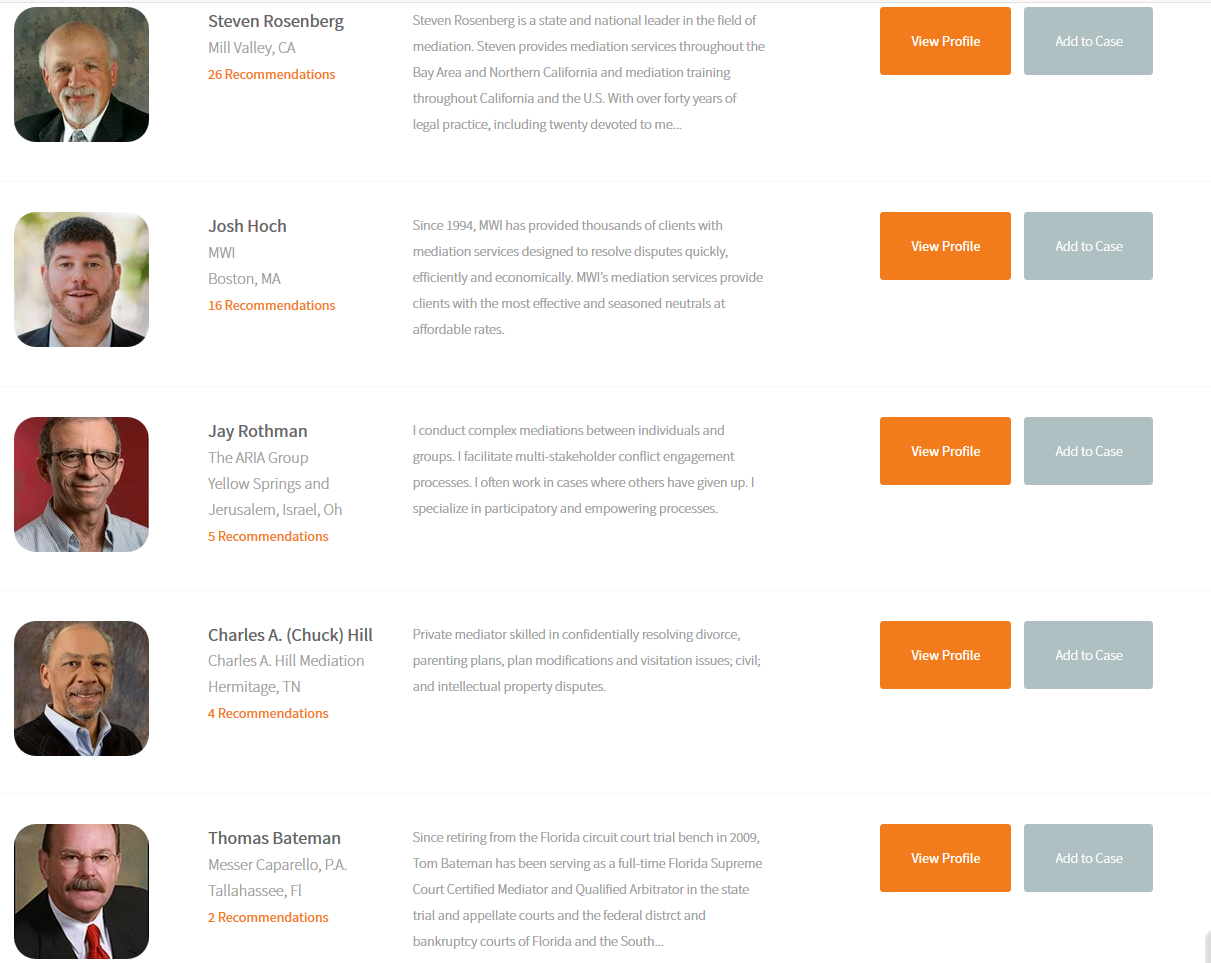 If you want to make sure you make the right choice, use the MediatorSelect directory to find the best divorce mediator near you.

When you attempt to navigate the negative emotions of a divorce through mediation, it makes it easier to come to a resolution. Around 90% of mediated divorce cases have settled successfully.

The final step is finding the right mediator to help you and your spouse through this transition.

Visit MediatorSelect to find the best divorce mediator to help make your divorce a positive change.